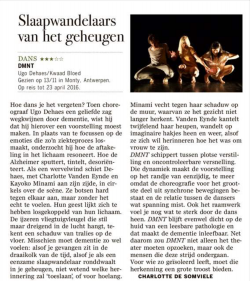 Sleepwalkers of the memory
16 NOVEMBER 2015 | Charlotte De Somviele
How can you dance ‘forgetting’? When the choreographer Ugo Dehaes saw someone he loved wasting away as a result of dementia, he knew he had to create a dance piece on the subject. Instead of focusing on the emotions that the course of this sort of illness stirs up, he examines how the deterioration resonates in the body. How Alzheimer’s sputters, flickers and disorients. Dehaes, with Charlotte Vanden Eynde and Kayoko Minami at his side, shoots like a whirlwind across the stage. They collide roughly with each other, but without really feeling it. Their minds seems to have become uncoupled from their bodies.

The metal aircraft wing that hangs motionless but ominously in the air casts a shadow of prison bars onto the floor. Perhaps this is how dementia feels: as if you were imprisoned in the vortex of time, as if you were wandering round in your memory like a lone sleepwalker, not knowing which memory will ‘strike’ next or for how long. Minami struggles against her shadow on the wall, but she no longer recognises its face. Vanden Eynde hesitantly tilts her hips, and walks back and forth on imaginary high heels as if she wanted to remember what it was like to be a woman.

DMNT tacks between sudden stillness and uncontrollable acceleration. This dynamic makes the performance very nearly one-sided, more so because the choreography consists largely of synchronous movements and the relations between the dancers rather lack tension. You also sense the framework coming through the dance a little too much. But DMNT sticks close to a recognisable pathology and that means one can imagine oneself with dementia. This is precisely why DMNT should be shown not only in theatres, but also to people who are engaged in this struggle. This sort of recognition could be a great comfort to those who live in such isolation.
Seen at Monty in Antwerp on 13/11/2015. On tour until 23 April 2016.